The problem with ten-dollar words is that they can price themselves right out of the business.  Once a fancy showboat like purlieu or miasma or effluvium has come on the scene saying, “Get a load of me,” it can be hard for the reader, upon subsequent encounters with those same ringers, not to think, “Didn’t I get a load of this already?”  No matter how long the book you’re reading is, when you hit that second circumambient, you probably still have a fairly distinct recollection of the first.  Making a splashy debut is one thing, but holding down steady work is another.

I’ve been to the well on this subject twice before* and have in those previous bucket-dunkings brought up such shiny attention-getters as unsentient, the sort of word that hardly needs to be used excessively for its use to feel excessive: Absalom, Absalom!’s “unsentient earth,” “unsentient barrow,” and—no, you are not reading this next one wrong—“unsentient plow handles” together constitute, I would argue, 200% more unsentience than any one novel should rightly contain.  (And as to my inconsistent practicing-versus-preaching policy in the area of not repeating oneself, I can only say in my defense that the well in question is pretty darn deep.)

Apotheosis, for example, seems like the kind of vocabulary seasoning that one would want to apply with some economy, but Absalom! is never less than a robustly flavored dish.  In one episode, kept women of multiracial heritage are described as “the supreme apotheosis of chatterly” and then, two pages later, as “the apotheosis of two doomed races,” while, in another moment, a man’s unobtainable self-ideal is characterized as “his own lonely apotheosis,” which, four pages after that, gets artily inverted into “the apotheosis lonely.”  (Elsewhere, for a final pinch of zest, there is “the dream which, conjunctive with the dreamer, becomes immolated and apotheosized.”  Oh, that dream again.)

Transmogrify is, no bones about it, an awesomely cool word.  External to the universe of Calvin and Hobbes, though, its frequency of use within a single work of fiction would likely best be capped at one (and even that might be pushing it).  If your book contains an unhappy woman whose married life has left her “transmogrified into a mask looking back with passive and hopeless grief upon the irrevocable world” and a couple of hardy, temperature-be-damned types who face the cold “in deliberate flagellant exaltation of physical misery transmogrified into the spirits’ travail,” you’ve got yourself an overegged pudding.

One click adjacent on the transmogrification knob is the setting for metamorphosis—and, fear not, the Absalom! stew will not go undersalted with metamorphoses, as unlikely as it is to see that word so well-represented outside of a lepidoptera textbook.  Fitting, then, that it should figure repeatedly in delicately winged metaphors of personal development—“Ellen went through a complete metamorphosis, emerging into her next lustrum with the complete finality of actual rebirth”; “[people] grow from one metamorphosis—dissolution or adultery—to the next…as the butterfly changes once the cocoon is cleared.”  But it also comes into play in the rather tangled erotic imaginings of one character who not only fantasizes about assuming the form of his sister’s fiancée so he can sleep with her (“that complete abnegate transference, metamorphosis into the body which was to become his sister’s lover”; “in the person of the brother-in-law, the man whom he would be if he could become, metamorphose into, the lover, the husband”), he also—and, hey, points for empathy—envisions what it would be like to be the female half of that coupling, to receive “the lover, the husband…by whom he would be despoiled, choose for despoiler, if he could become, metamorphose into the sister, the mistress, the bride.”  So, once your therapist is done interpreting those immolated and apotheosized dreams of yours, see what she makes of that one.

The multi-stage arc of experiencing a word like importunate can be charted with a series of points: Upon one’s first brush (“to heat and make importunate the blood of a young man”), one may reach for the dictionary and offer appreciations, Ah, “urgent or persistent”—what lively word selection!; upon the second (“the surprised importunate traitorous flesh”), one may feel a flickering of concern, Ah, but Author, Good Sir, did we not see this rather noteworthy word in just the previous chapter, also in very similar context?; and upon the third (“any hushed wild importunate blood”), one may gently opine, Ah, man…another one?  And with “blood” again?!

Other nominations I would make for the One of Those Should Be More Than Enough, Thank You designation include repercussive (“the fierce repercussive flush of vindicated loyalty,” “the tedious repercussive climax”), volte face (“a volte face of character,” “one of mankind’s natural and violent and inexplicable volte faces”), and lugubrious (“some lugubrious and painless purgatory,” “lugubrious and vindictive anticipation,” “lugubrious and even formal occasions”—these last two separated only by the space of as many pages).  You get all of these together in the same recipe, and, mamma mia, that’s a spicy meatball.

*Physician, heal thyself!  (Those visits are here and here.)

Some probably seems like an awfully milquetoast word to get much exercised over, but I’m not thinking here of the everyday, approximate-amount, “Would you care for some tea?” incarnation, but rather the “occurrences which stop us dead as though by some impalpable intervention” variety—the “some pure dramatic economy,” “some almost omniscient conviction” sort.

Clearly, some is not meant in these cases to suggest “a rough measure of intervention” or “a nonspecific supply of economy” or “a shtickle of conviction”—instead, in Absalom, Absalom!, some is insistently employed as the all-purpose spice of “meaningful”-sounding vagueness, ever at the ready to preface any phrase with a dash of portentous indeterminacy.

This is, of course, the same gambit as all of Faulkner’s sort ofs and kind ofs—these conceptual targets at which he aims are so abstrusely unstrikable, you see, that a near-miss is one’s best hope.  No, it is not a particular lugubrious and painless purgatory to which he refers, but “some lugubrious and painless purgatory”; not any precise sophisticated and ironic sterile nature, but “some sophisticated and ironic sterile nature.”  (Such Deep Thoughts put me in mind of Alvy Singer asking Annie Hall about a rock concert she has attended without him—“Was it heavy? Did it achieve total heavy-ocity?”)

As it happens, this device even manages on a number of occasions to incorporate a few other notable Absalom! buzzwords like effluvium (“some effluvium of Sutpen blood and character,” “some tangible effluvium of knowledge”) and undefeat (“some incorrigibility of undefeat,” “some indomitable desperation of undefeat,” “some bitter and implacable reserve of undefeat”).  As for the rest of the list, well—it really is some sight to see:

So how many times is too many times to employ any given word within a single book?  Obviously it’s a matter of taste, and any boundary would have to be arbitrary—but I think it’s safe to estimate that once you’ve used the word, say, fury or furious over 35 times in your novel, some sort of invisible line has been crossed.

I would also venture that there are some words that probably shouldn’t be used even more than once.  I remember the first time I came across the word fecund in one of James Lee Burke’s Louisiana-set policiers.  Not knowing it, I looked it up (“producing or capable of producing offspring, fruit, vegetation, etc.”) and enjoyed having learned a nifty new word.  But when I encountered it again later in the same book, the effect was more jarring than enjoyable—the second time around, what had seemed originally a bit of pleasurably colorful vocabulary now more resembled a pet flourish drawn from a shallow bag of tricks.*

But perhaps I was just being oversensitive to the fact that I hadn’t originally known what fecund meant—many, I am sure, would say it’s not an overly conspicuous word, nothing whose repeated use should be forbidden.  Still, surely there are some “inkhorners” (as Nicholson Baker would call them) whose effect is so clangorous as to invite a check on their proliferation—ratiocination, for example, strikes me as a good candidate for the “one per book” rule.  Or maybe even a more lenient maximum, like two or possibly three ratiocinations total…but certainly, one would hope, somewhere south of five?  (As Marge Simpson says to Homer after he drunkenly embarrasses her at a party: “You didn’t just cross that line, you threw up on it.”)

“Henry…given to instinctive and violent action rather than thinking, ratiocination”; “the aunt must have had no doubts about Father…though she was probably past all ratiocination by then”; “he…added further, out of some amazed and fumbling ratiocination of inertia”; “the fragile pandora’s box…filled with violent and unratiocinative djinns and demons”; “that best of ratiocination which after all was a good deal like Sutpen’s morality”—okay, to be fair, Absalom, Absalom! has only four ratiocinations, with the fifth occasion coming in the form of an unratiocinative, but who’s counting?  (Oh, right: me.)

Effluvium is another look at me! look at me! sort of word that you would think might benefit from frugal application—but I guess I hadn’t realized, until I read Absalom!, just how many different types of effluvia there are: “tangible effluvium,” “secret effluvium,” “unmistakable effluvium,” and even “presbyterian effluvium,” as was mentioned in a previous entry.  The memory of one demonic departed character is evoked so vividly as to be almost ghost-like, “itself circumambient and enclosed in its effluvium of hell.”  (And, no, this is not the book’s only instance of the word circumambient.)

Other such sore thumbs include brigandage, cherubic, shibboleth, and substanceless, each of which notches three separate exhibitionist appearances apiece in the book’s pages—how could words that so insistently call attention to themselves have escaped the notice (and red pen) of an editor?  It defies ratiocination.

*Nicholson Baker, in his John Updike appreciation U and I, captures perfectly the anxiety from a writer’s perspective of being so labeled: “I looked askance at ‘florilegia’ and ‘plenipotentiary’ because I felt a needle jump in my déjà vu-meter that might indicate that I’d used them both before, and I didn’t like the idea of people (i.e., Updike) thinking, ‘Florilegia again?  It wasn’t that great the first time!  He’s pretending his vocabulary is a touch-me-anywhere-and-I’ll-secrete-a-mot-juste kind of thing, when it turns out to be this cribbed little circle of favored freaks that he uses over and over hoping nobody will notice!’”

(I also would like to add that I am a big fan of James Lee Burke—although his work does contain a lot of fecundity.) 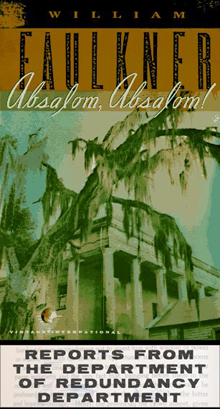